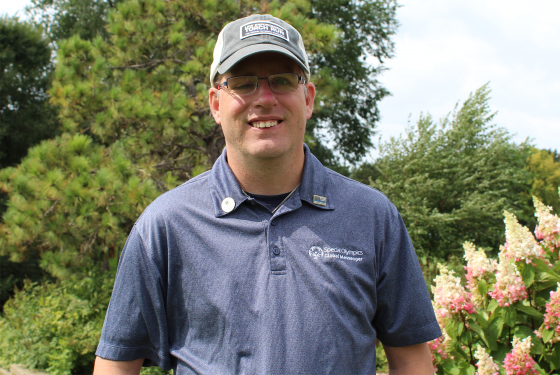 If you’ve ever met Bob Larson, you know that his positive energy is contagious. He’s grounded, he’s genuine, and he leads his life with a whole lot of kindness. Bob lives his life by one guiding mantra. The phrase, “Love God, love people, make a difference and be thankful,” is in his email signature, it’s saved in his phone, and it’s a perfect representation of Bob as a human being.

Bob, who currently lives in Bloomington, MN, is 41 years old. He was born in 1978 and was adopted six years later in 1984. He’s extremely close with his parents, siblings and extended family. He had a great childhood growing up in St. Louis Park, MN, and his involvement with Special Olympics began when he was just a kid in elementary school. Through his special education program at school, Bob got involved in a multitude of different sports and activities. From softball to floor hockey to golf, he quickly became a year-round athlete.

“When I first started, I used to participate in all sorts of different sports. I really did anything that Special Olympics offered,” says Bob. “Actually, I don’t think I ever did basketball. I’m not a big basketball fan.”

He fell in love with Special Olympics at an early age, largely in part to his relationship with his first ever coach, Jack, who he is still in contact with. Through the years, Bob’s involvement grew beyond just being an athlete on his school’s Special Olympics team. As Bob got older, he got involved with volunteering, he became extremely active with the Polar Plunge, and he became an experienced public speaker and Global Ambassador through ALPs University. Though his role with Special Olympics has evolved over the years, he still participates in traditional sports as well.

“Today, I just do advanced downhill skiing and golfing with my team,” says Bob. “I have a busy schedule nowadays, so they work out the best. But they’re also two of my favorites.”

In his 41 years, Bob has gained many things through Special Olympics: lasting friendships, leadership skills, athletic opportunities, improved eyesight and overall health, and more. But the most important thing to come out of it all? Laura.

Bob and Laura met at church in 2005, and they’ve been inseparable ever since. While they didn’t meet through Special Olympics directly, they bonded over their involvement in various sports and connected through their personal experiences of living with an intellectual disability. They quickly became each other’s number one cheerleader, both at competitions and in life in general.

After over a decade of dating, Bob and Laura decided that it was time they take things to the next level. The couple sat down and had a talk with their parents about getting engaged, having a wedding, and moving in together.

“I asked her when she wanted to get married, thinking she would say a few years down the road or something,” says Bob. “I thought I had some time. But she simply said, ‘Spring.’ I was basically like okay, let’s get the ball rolling!”

From there, his next step was planning a proposal.

“When Laura and I got engaged, it was really special,” says Bob.

Bob had a surprise proposal planned for Laura in their church. He was waiting in anticipation with a dozen red roses and a ring. When he got down on one knee and asked Laura if she would marry him, she replied with a simple “Yep!” and a smile.

Then wedding planning took over. Both families were heavily involved in planning the wedding. They were engaged for less than a year when they finally tied the knot in June 2019.

Bob and Laura’s wedding was held at a small chapel in Lutsen, MN. The chapel is situated on the grounds of Mt. Olivet’s Cathedral of the Pines Camp, over 260 miles north of the Twin Cities. Cathedral of the Pines is a place special to both Bob and Laura, as they have fond memories of attending this camp with friends and fellow parishioners from their church over the years.

Bob recalls that it was a beautiful, intimate wedding.

“We kept things small. We only had one bridesmaid and groomsman each, and one of Laura’s friends officiated the ceremony” says Bob. “We only had close family at the wedding. My Uncle James was my best man.”

Getting married is a big accomplishment for anyone. But for Bob, it’s really something special. When he was asked what he was most proud of in his life so far, he answered quickly:

“I’m so proud of being married. When I was younger, I would hang out with my best friend all the time. We would talk about life, the future, our dream jobs. But getting married was never really in the picture. Our goals were simple. We wanted to live together some day as best friends, and we wanted to have jobs where we had keys on our belt and a walkie talkie in our hand.

“Well, I actually accomplished that goal! I’m a custodian at my church and I use a bunch of keys and a walkie talkie every day at work. That’s what I saw for my life. Never in a million years did I think I would find a girl as great as Laura. She’s a dream come true.”

We asked Bob how he defines inclusion. “To me, inclusion means that a person with a disability can be included in whatever they want to do. Whether that’s in sports, at work, or just in life in general, it doesn’t matter,” he says.

Whether it’s landing a dream job, winning a gold medal at a competition, or getting married to the love of your life, Special Olympics Minnesota is working to foster a more inclusive world for everyone, regardless of ability.