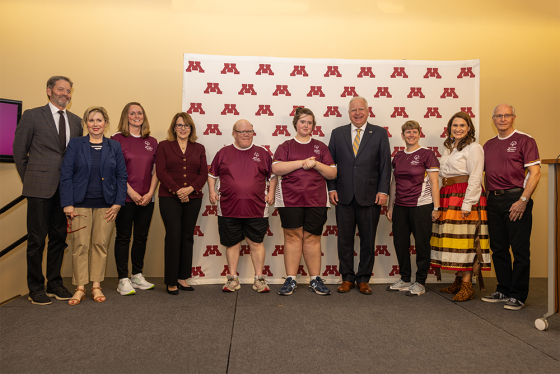 Thousands of athletes, families and fans will attend the games in June 2026

The 2026 Special Olympics USA Games will take place in Minnesota, bringing together athletes, coaches and fans who will showcase inclusion, competition and how to unify the world through sport. In June 2026, the Twin Cities will host as many as 4,000 athletes, 10,000 volunteers, 1,500 coaches and 75,000 fans from all 50 states, parts of Canada and the Caribbean.

Much like other large-scale sporting events, a competitive bid process was conducted to select a host site that has the infrastructure, resources and active community support needed to operate a successful Games. After a year-long bid process, the announcement that Minnesota has been awarded the bid came from Minnesota Governor Tim Walz at a press conference on May 6, 2022.

“I am proud and excited that Minnesota will host the 2026 USA Special Olympics Games,” said Governor Tim Walz. “Minnesota has always been an epicenter for health and wellness, and that includes inclusive health for all Minnesotans. Hosting the USA Special Olympics Games emphasizes our commitment to creating a state where everyone can participate in athletic competition and pursue their goals at the highest level.”

The Games will be comprised of 15 Olympic-type team and individual sports, as well as five demonstration sports. Sport competition will be hosted at the University of Minnesota and additional world-class venues throughout the Twin Cities. “We are thrilled to welcome the Special Olympics athletes and their families to our world-class University of Minnesota Twin Cities campus in June of 2026,” said President Joan Gabel, Honorary Co-Chair for the 2026 USA Games. “Our university shares the same goals of the Games in transforming lives through inclusion and celebrating each person’s greatest ability.”

Special Olympics serves as the world’s largest sports organization empowering people with intellectual disabilities, and the 2026 Special Olympics USA Games will mark the largest sporting event in the US that year. Historically, the Games have generated over $70 million dollars of economic impact for their host city.

UnitedHealth Group is the presenting sponsor of the 2026 Special Olympics USA Games. The healthcare company, which includes UnitedHealthcare and Optum, has been a long-time supporter of Special Olympics Minnesota and is committed to helping people live healthier lives, increasing access to care and eradicating health disparities for all. UnitedHealth Group will play a key role in making the Games a success and by leaving a lasting impact on inclusive health in Minnesota.

Brian Thompson, UnitedHealthcare’s CEO, will serve alongside Joan Gabel as Honorary Co-Chair for the Games.

“On behalf of the more than 350,000 employees from UnitedHealth Group, we are thrilled to be the presenting sponsor of the 2026 USA Games right here in our hometown,” Thompson said. “We have a long history with Special Olympics and support the Games’ vision of inclusion. We look forward to seeing everyone out in the community supporting these athletes as they pursue their goals at the highest levels of competition.”

In addition, Special Olympics board member and UnitedHealth Group executive Adam Hjerpe will serve as the Board Chair for the Games. Joining Hjerpe on the Executive Board will be Dave Dorn, CEO of Special Olympics Minnesota and Wendy Williams Blackshaw, CEO of Minnesota Sports and Events.