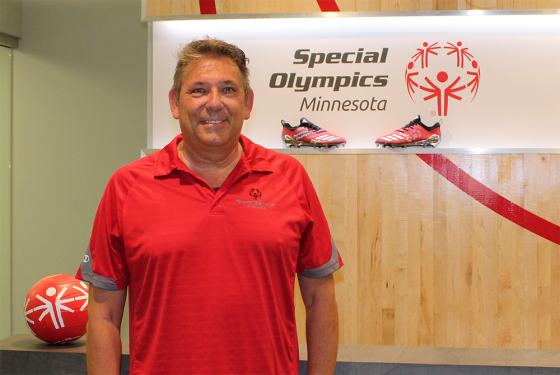 Ray Kennedy does it all. He’s a coach, a key SOMN volunteer, the parent of an athlete and an enthusiastic leader in his community, and he’s dedicated to making the world a more inclusive place.

Ray and his family first got involved with Special Olympics Minnesota over 20 years ago. Ray’s son, Ian, had an elementary physical education teacher who saw his athletic abilities and recommended he get involved with their local Special Olympics team. And as soon as he was eligible at eight years old, Ian was running around the track with the Hastings Sharks.

“Ian has always been a runner. The first sport that he got involved with was track and field,” says Ray. “At first I said, ‘What? You’re going to teach him to run faster?!’ I could barely keep up with him already.”

But after Ian’s first practice, the Kennedys were hooked. “After we first got involved, one thing led to the next and to the next, and all of sudden we were doing basically everything,” says Ray. “One coaching certificate led to another, and our whole family quickly became deeply involved.”

Though he’s scaled back his involvement a bit over the years, Ray loves being a coach. He still coaches golf, swimming, athletics, bowling and basketball, and he’s an active volunteer for his local sports management team.

“As a coach, it’s such a great feeling when you see something click for one of our athletes,” says Ray. “When a skill doesn’t come naturally to them, but they practice and practice, and all of a sudden it clicks? That’s really cool to be a part of.”

This may sound like a lot of time and energy—and it definitely is—but Ray explains that it’s all worth it. His involvement with Special Olympics Minnesota has had a positive impact, both on a personal level and in the Hastings community.

“Over the years, what my family has given, we’ve gotten back tenfold. A hundredfold. Yes, you’re giving your time to the community, but every experience I’ve had has really been a lot of getting,” says Ray.

“Special Olympics especially changed Ian’s school and social life,” says Ray. “With his intellectual disability, it can be difficult for him to connect to people. But after getting involved, he has made more lasting connections than we ever imagined. He now has so many friends just because of his involvement in Special Olympics and in sports.”

And not only did Special Olympics Minnesota transform Ian, but this transformation extended to the entire Kennedy family.

“We are a tighter family because of Special Olympics. Our sons have become kinder. They actively spread the message to stop using the r-word. They are advocates for kindness and respect, and that’s something we’re so thankful for,” says Kennedy.

In addition to the positive impact on Ray’s personal life, Special Olympics Minnesota’s programs and initiatives have benefitted the entire the Hastings community. The Hastings Sharks have walked in city parades, they’ve hosted local fundraisers and they’ve grown their delegation to be one of the largest in the state.

But one of the best things that the Hastings Sharks has done for their athletes was incorporate health education into their practices via the SOfit and Fit 5 programs.

“We really had some successes from utilizing these resources,” says Ray. “We had an athlete on the Sharks who drank about five or six cans of Mountain Dew per day. She dropped down to zero just from learning more about healthy habits and making them a priority.”

This shift toward healthier lifestyles is just one way that Ray has seen Special Olympics Minnesota transform his friends and family over the past 20 years. When asked about his hopes and dreams for the future, Ray said that he loves to see the Unified movement in schools growing.

“I’m honestly sad that our district didn’t have Unified programming in schools when Ian was still in school,” says Ray. “But I love the direction that things are headed. I’m excited to see how it grows. I think it’s so important to teach more about inclusion in schools.”

When asked to talk more about the term “inclusion,” Ray answered quickly: “It’s just that. Don’t exclude anybody,” says Ray. “Do you occasionally make mistakes? Of course. But it’s about making an effort to be inclusive of all people and of all abilities.”

Ray’s definition of inclusion shows how he embodies Special Olympics Minnesota’s mission. He’s a walking example of how to best practice inclusion and acceptance in everyday life, and he spreads this joy through coaching.

“I’m constantly trying to remind our athletes that it doesn’t have to be about their disability. There may be things that you can’t do, but there’s a whole lot you can do.”

Ray takes volunteering to an extreme level. He has spent countless hours and over two decades at Special Olympics events. But Ray’s advice for initially getting involved with Special Olympics Minnesota is simple: Just do it.

“If you’re presented with the opportunity to get involved with Special Olympics, please do it. Jump in with both feet,” says Ray. “It’s not only beneficial for people with intellectual disabilities. I think that if everyone in the world was involved with or touched by Special Olympics in some way, there would be a lot more peace and understanding. I truly believe there would be no more wars.”

We would like to extend a big thank you to Ray Kennedy for being a dedicated Special Olympics Minnesota leader. We are so grateful for all that the Kennedy family contributes to their team, their community and the world.