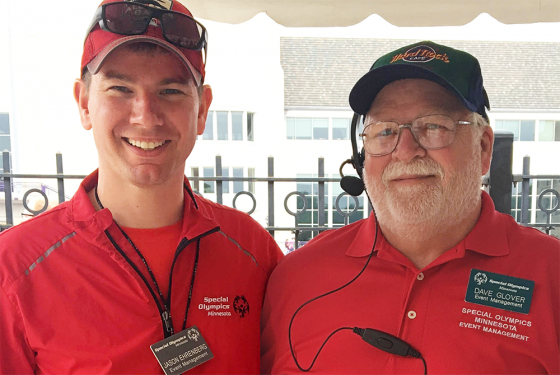 Jason Ehrenberg is the leader that every team needs.

After his first golf competition in 2007, Jason has been heavily involved in the Special Olympics Minnesota community. For over twelve years, he has been a key volunteer at many area, regional and state competitions, and he’s an influential leader on the Area 12 Sports Management Team.

Jason was nominated by SOMN Program Manager, Sarah Richardson, who works closely with him on the planning and execution of competitions throughout the year.

“I text Jason more than I text some of my closest friends,” says Sarah. “He leads the charge on organizing area meetings and facilitating positive change throughout the state. Jason is involved in every big decision and is always a phone call away to brainstorm new ideas and solutions.”

At competitions, Jason is consistently the first person to show up, walking into the day with a smile on his face and his favorite Special Olympics mug in his hand. Throughout the day he takes charge on training in volunteers, supervising key areas, and monitoring the schedule to make sure everything runs as smoothly as possible. Though Jason isn’t a full-time employee at Special Olympics Minnesota, he pretty much serves as one on a competition day.

After every event that he attends, Jason follows up with detailed time records, questions, and notes on how to improve the volunteer experience at future events. He spends his free time drafting new volunteer resources and doing research on ways to improve competitions. These efforts are not at all required from a volunteer, but Jason is so passionate that he is always looking for new ways to support the future of Special Olympics Minnesota and change the landscape for people with intellectual disabilities. He is truly an event manager’s dream, come to life.

“Jason is flexible, fun to work with and feels comfortable in any position. He takes on important roles without question or hesitation, and is an expert at handling difficult situations,” says Sarah. “Great volunteers are hard to come by, and I feel so lucky to have Jason on my team.”

Jason Ehrenberg is an exceptional husband, father, colleague and leader in the Special Olympics Minnesota community and in the world. He always goes above and beyond what’s asked of him, and it’s safe to say that nearly everyone who meets Jason wishes they could have him as a friend and as a leader in their community. Interested in joining us to celebrate this year’s Distinguished Service Awards honorees? Reserve your seat today, or visit our DSA page for more information.