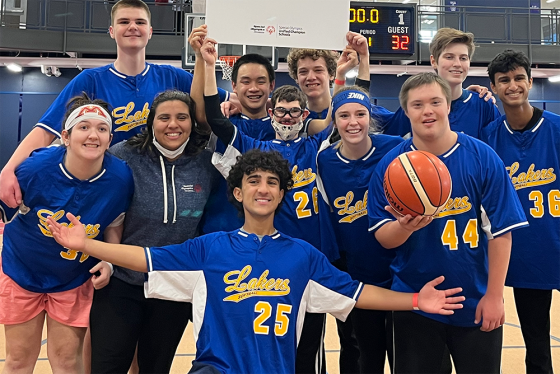 When Minnetonka High School senior Katrina Tadros was in third grade, she met Aiden, who became one of her first friends. Through that friendship, Katrina found Special Olympics and has since been involved in Unified Champion Schools, leadership opportunities, sports, activities and more.

We had the chance to chat with Katrina about her Unified experience!

How are you involved with Unified Champion Schools?

I have been a part of my school’s Unified Special Olympics Club for four years, and I have been a leader for two years. This is my second year on the Student Board of Directors, and I also serve as a Cabinet member.

How do you define inclusion?

My go-to answer is something my school came up with together: inclusion is a mindset. Whenever anyone asks us how to explain it, we say it’s supposed to be something that’s natural to you; you want to include someone because they’re awesome! It gives you a chance to broaden your experiences and perspectives and learn something. Inclusion should just be the mindset you have, and I’m always going to treat people with respect, kindness and dignity, no matter who they are.

How do you define Unified?

Unified is a safe space where people get to learn about what inclusion means. In Unified, you can make mistakes and that’s okay. It’s a safe space at its core, but it’s also a place to meet new friends. It’s a place to have friendly competition and serious competition, but be friends with another and enjoy being in the presence of each other.

What is the importance of inclusion in schools?

I think schools can be a really lonely place if you don’t have a group of people. I think a lot of people with intellectual disabilities have felt that. So, I think inclusion in schools means no one is feeling lonely, that everyone has someone they can talk to, someone they can eat lunch with, someone they can walk to class with.

What is the most challenging aspect of implementing Unified in schools?

I think it’s trying to fight a stigma that’s been there forever. For example, it is hard to change a perspective that people have about the R word. The R word used to be a medical term and then we realized it’s actually a harmful word. It is hard trying to change people’s opinions when they are simply naïve or don’t know, or don’t want to know. That can be a challenging experience within the schools.

What are some of your favorite Unified stories?

The state basketball tournament will always be my favorite. In our regional tournament, we lost our first game, so we really didn’t expect we were going to go to state. But we ended up winning the final three games, so we went to state! I got to go to state at the Target Center with Aiden, who was the first friend I made. That was just surreal and awesome. I think that will forever be a core memory of mine.

How do you hope to stay involved with Unified after graduation?

Any other thoughts or comments?

Unified is cool! I’m very excited to see how Unified and Special Olympics are going to shape our generation, and how we are going to become so much better for it. That will be very exciting to see in the future.