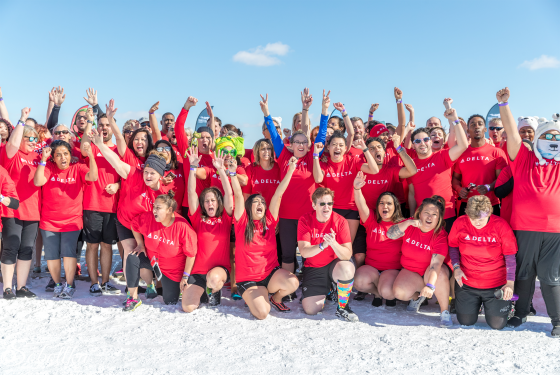 For most of us, the Polar Plunge is an event that we attend once a year. We might hang out for a couple of hours, jump into the frozen water and then go home to start our countdown to next year’s Plunge.

For the folks that work at Delta Air Lines, the Polar Plunge is a year-round activity.

Eric Johnson, Jeff Hart and Nicole Tentinger are leaders that rally the troops and keep things organized for the Delta Frozen Flyers. From coordinating logistics like hotels and transportation, to hosting internal fundraising competitions, to keeping excitement high throughout recruitment, these three put a lot of hard work into the Plunge.

“Organizing the Polar Plunge within our company brings forth a lot of collaboration,” says Jeff. “No other team-building activity throughout the year compares. It’s a lot of work, but in the end it’s so worth it.”

By participating in the Plunge, hundreds of Delta employees come together with the common goal of doing good. Due to the nature of being such a huge organization, many Delta employees don’t always get the chance to meet people beyond their department or beyond their location. The Plunge allows Delta to host a worldwide team-bonding event, where employees who might otherwise never cross paths with each other are given the chance to get to know each other a little better as they jump into a frozen lake.

The 2020 Plunge season will be Delta’s 13th in a row. With over a decade of experience, the Delta Frozen Flyers are a group of Plunge pros; but it took some persuasion in the beginning to get the whole organization on board.

“It all started with probably less than ten of us back when we were a part of Northwest Airlines,” says Jeff. “It just started as a small idea, and the first years were a little rocky. There was some convincing to do. But ever since, every year has been better than the last.”

It’s a good thing that Jeff and his colleagues didn’t shy away from a little turbulence at the beginning. Delta’s Plunge team that began with less than ten employees has grown to a team of several hundred. Their goal for this year is to reach 500 Plungers on the Delta Frozen Flyers.

What keeps Delta coming back year after year? The impact.

“I don’t remember how cold it is every year,” says Nicole. “The thing I do remember is where the money is going. The interaction and the testimonials of Special Olympics athletes have made the biggest impact on me personally.”

“There’s something electrifying about when our group comes together right before we jump,” says Eric. “The energy level is at its peak, there’s a ton of positive employee engagement, a lot of camaraderie from us all being there together. It’s just a blast.”

Delta is spreading the mission of Special Olympics Minnesota to an audience far greater than we could do on our own. Throughout the years, Delta has flown in hundreds of employees from over 26 states and 28 different countries. Through their involvement, people across the globe in countries like France, China, Singapore, Iceland, Taiwan, Uganda and more, are now familiar with the mission of SOMN and are champions of inclusion.

The Plunge may be a bucket list item for many people, but it represents and supports so much more than that. After the Plunge, people take home the accomplishment of jumping into a frozen lake, but they also take home with them the impact of inclusion.

“The scope of Special Olympics Minnesota is really impressive,” says Nicole. “From health and wellness to everyday inclusion, I think it’s amazing. Especially in a society and world where we’re not necessarily seeing inclusion at its best all the time.”

This year, Delta Air Lines is competing in the “Big 3 Challenge” alongside two other Minnesota-based companies, UnitedHealth Group and U.S. Bank.

In 2019, the Big 3 teams raised a combined $475,000 for Special Olympics Minnesota. UnitedHealth Group took home the trophy as the first annual Big 3 Challenge Champion, raising over $168,000 with 248 total participants.

This year, the Big 3 Challenge is back and better than ever, and Delta is in it to win it. The challenge will culminate at the Minneapolis Polar Plunge on Feb. 29, 2020.