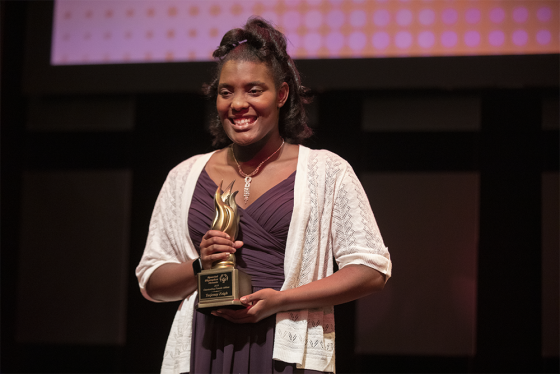 “I don’t run away from a challenge because I am afraid. Instead, I run toward it because the only way to escape fear is to trample it beneath your feet.” – Olympic gymnast, Nadia Comaneci

Tasha Feigh was faced with many challenges from a young age, but rather than run from them, she faced them head on with courage and grace.

Due to neglect and health complications at birth, Tasha couldn’t crawl, eat solid foods or make any sound when she entered Mary and Ed Feigh’s foster home at 13 months old. She didn’t walk until age three and only communicated through simple sign language until age four. The Feigh family adopted Tasha when she was five years old, and through therapy programs and perseverance, Tasha was able to grow and progress into the outstanding young woman she is today.

In school, Tasha was placed in special education classes so she could get the additional help she needed. From a young age, those around her could clearly see that had an interest in and talent for sports. She tried local park and recreation programs, but they weren’t a great fit. Then, when Tasha was eight years old, she found her place in Special Olympics Minnesota.

Throughout her time with Special Olympics Minnesota, Tasha has competed in basketball, bowling, flag football, gymnastics, poly hockey, softball, swimming and track and field. She has competed at the local, state and even national level. In 2018, she represented Special Olympics Minnesota on the all-state gymnastics team at USA Games in Seattle. And in 2019, she was a part of the MNUFC Unified soccer team that traveled to Colorado to compete.

She’s even willing to learn new skills so she can pursue new opportunities. For example, at one point she was offered a spot in the Minnesota Wild Special Hockey Program. She was reminded by friends and family that she had never been on hockey skates before, but that didn’t stop Tasha. She said, “I can just learn how to skate,” and that’s exactly what she did!

In addition to traditional sports, Tasha stays involved with Special Olympics leadership programs and fundraising events. She regularly makes appearances at Polar Plunge events and has helped out with the Cop on a Rooftop fundraiser at Dunkin’ Donuts. She attended Leadership University (formerly known as ALPs University), where she was able to find her voice and fine-tune her leadership skills.

Beyond her involvement with Special Olympics Minnesota, Tasha made quite the impact in her time at Osseo High School. She has been honored with many awards and titles, including an Athena Award from Osseo High School. Not only is this a prestigious title for any student athlete, but Tasha made history as the first person in her high school to win both the Athena Award and Female Athlete of the Year for her accomplishments in adapted athletics. She was also named Star Tribune’s Athlete of the Week, captain of her adapted teams and MVP, and she holds multiple school records for her athletic performances.

Since graduation, Tasha has served as a coach with the Osseo High School adapted program, helping coach and mentor high school students in three of her favorite sports—softball, soccer and poly hockey. She loves being able to share her passion for sports, and she’s a fantastic role model for the students, especially for the young women who look up to her.

Special Olympics Minnesota—the organization to which she gives her heart and soul—honored her accomplishments and positive attitude at the 2019 Distinguished Service Awards. Tasha was the recipient of the 2019 Outstanding Female Athlete Award because of her exceptional involvement and her deep-rooted passion for sports.

She’s a leader on her team, the OMGAA Storm, and she’s always willing to help and encourage others. Her can-do attitude is honorable and contagious. Tasha is respectful and courteous, both on and off the field. She’s the kind of athlete anyone would love to have on their team.

Tasha has the courage, energy and willpower to conquer her fears, and she excels in all that she does. Through hard work and dedication, Tasha has made the most out of her Special Olympics career and consistently makes a positive impact on those around her. We can’t wait to see where she goes from here.

Though we cannot currently hold events and competitions due to COVID-19, Tasha is still staying engaged with the SOMN community at home. She recently participated in gymnastics in the 2020 Virtual Summer Games, receiving gold medals in passe pivots, dance and sit ups, and silver medals in the scale and apparatus events.